Research task: Look at range of artists working today and how they incorporate positive and negative spaces in their work – annotate some examples.

In her book “Drawing on the Right Side of the Brain” Betty Edwards asks the reader to imagine the cartoon character, Bugs Bunny, speeding down a corridor and through a closed door leaving a Bugs Bunny-shaped hole in the door. She describes, “What is left of the door is negative space and the hole  in the door is the positive form”.

As well as in cartoon films the use of positive and negative space is used considerably in contemporary design.

Fedex the delivery and courier company makes a very subtle and clever use of negative space with the arrow between the E and the x which often goes unnoticed, perhaps a more subliminal use.

One of my favourite examples is the poster below designed by Phoebe Morris for the film version of Peter and the wolf.

Here there is a clever balance between the black positive space of the wolf and the white negative space of Peter such that the boy’s head is not at first noticed and then the image has a rather unsettling effect.

Another extensive and brilliant use of positive and negative spaces is the work of Israel-born graphic designer, illustrator and artist Noma Bar who now lives and works in London.  As well as exhibitions all over the world Bar does illustrations for leading newspapers and magazines and is particularly famous for his portraits. Below are iconic images of Bob Dylan and Donald Trump, together with the poignant image of Princess Diana. 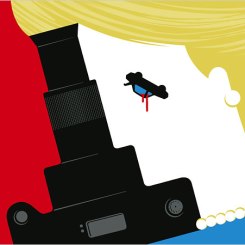 Bar has also done more political work arising out of many of the world’s conflict situation, aimed at bringing the viewer up sharp but also of encouraging further layers of meaning and reflection. His travelling exhibition “Cut the Conflict” illustrates this well.

Bar creates his arresting images with shapes or blocks of a single colour cut into by a second colour. Both may then be further added to or cut out. Bar’s images and style are reminiscent of the use of positive and negative space in early twentieth century Russian constructivist art such as the following by El Lissitsky’s “Beat the Whites with the Red Wedge”1919 and Kasimir Malevitch “Peasants” 1930: 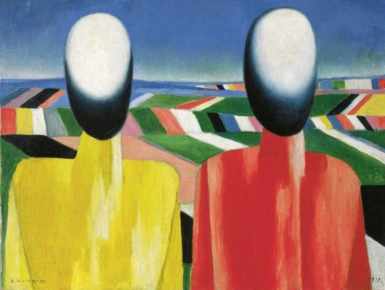 Both these images are also political though “Red Wedge” is more brutal propaganda, supporting the involvement of the Bolshevic Army in the 1917-1922 civil war. “Peasants” is more reflective about the way this group are now automatons in the new industrialised farming programmes of the Revolution

A contemporary English artist working in a similar style to Bar is Gary Hume. He too exploits positive and negative space in many of his drawings and paintings. Like Bar his work is dramatically simplified in shape and colour. As a young British Artist he first came to prominence with his ‘door paintings’, life-size paintings of actual doors in St Bartholomew’s Hospital in London depicted in a few simple colours and shapes with household paint. A version “Four doors” 1990 is below left and in the centre and right 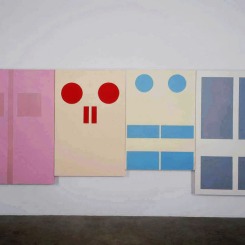 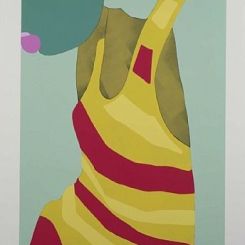 The beauty of Hume’s painting is in their Zen-like minimalism and simplicity. They are at the boundary of realism and abstraction. There is an aesthetic pleasure in his colours and shapes and in particular the intricate balance of the positive shapes with the negative. As can be seen in “London Fields” the forms are described by shape and colour without the use of line.

In my own work I have tended to favour line and perhaps not paid enough attention to shape, including positive/negative shapes. For example, I could have done more work than I did on positive and negative shape in Project 2 exercise 1, Still Life with Line really  developing the shapes of the Denbyware items and their relationship to each other.  I have learned in this small piece of research the power and beauty of shape and intend to explore this further in my own experiments and preparatory work.

back to the drawing board

“Every artist was first an amateur." — Ralph Waldo Emerson