Choosing you own source material and media and taking account of the following factors work on either a still life or interior scene or a combination of these. Your subject matter can be quite different from your source material.

For some time my favourite period of art history has been from about 1870s to the 1930s and the creation of Modernist art, broadly the period from Cezanne to Expressionism. I see these great as a great period of freedom for experimentation, new ideas and transitions At the end of April I attended the  study visit to the Ashmolean Museum in Oxford for the Degas to Picasso Exhibition. An important aspect of the exhibition was the development of Cubism with many pictures not seen before which showed the work of these revolutionary artists working towards the kind of paintings we know best under the names of Picasso and Braque.

This inspired me to think about the possibility of my assignment piece being in a Cubist style and I decided to use the scene I had drawn in Exercise 3 (on the left in picture below) and develop it along Cubist lines. The scene is commonplace which is very much theme of the Cubists. I made an A4 sketch of the scene and then drew over it with tracing paper breaking up and re-arranging the scene with directional lines, a variety of new shapes and patterns and disrupting the previous fixed point perspective (image on right hand side). I liked the result but felt that it portrayed an untidy and cluttered room rather than a Cubist breakthrough! 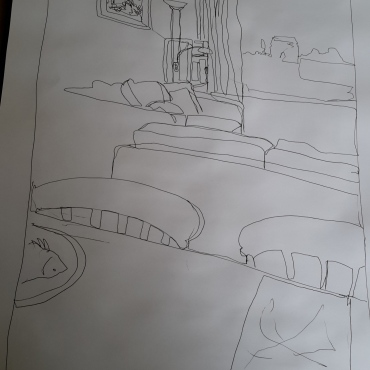 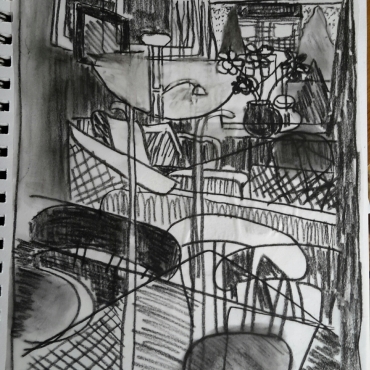 Among my favourite pictures at the Degas to Picasso exhibition was  Nature mort c. 1911/2 by Albert Gleizes (1881-1953) in which, as the catalogue describes,
“Cezanne’s fragmentation and flattening of form are combined with a relic of Fauve colour”. Gleizes’ painting is an example of a later development referred to as Synthetic Cubism. This is different from the earlier Analytic Cubism, with its complex interweaving of lines and planes, in that it utilises simpler lines and shapes, uses brighter colour and different textures (Tate Gallery Online Student Resource Analytical v. Synthetic Cubism) 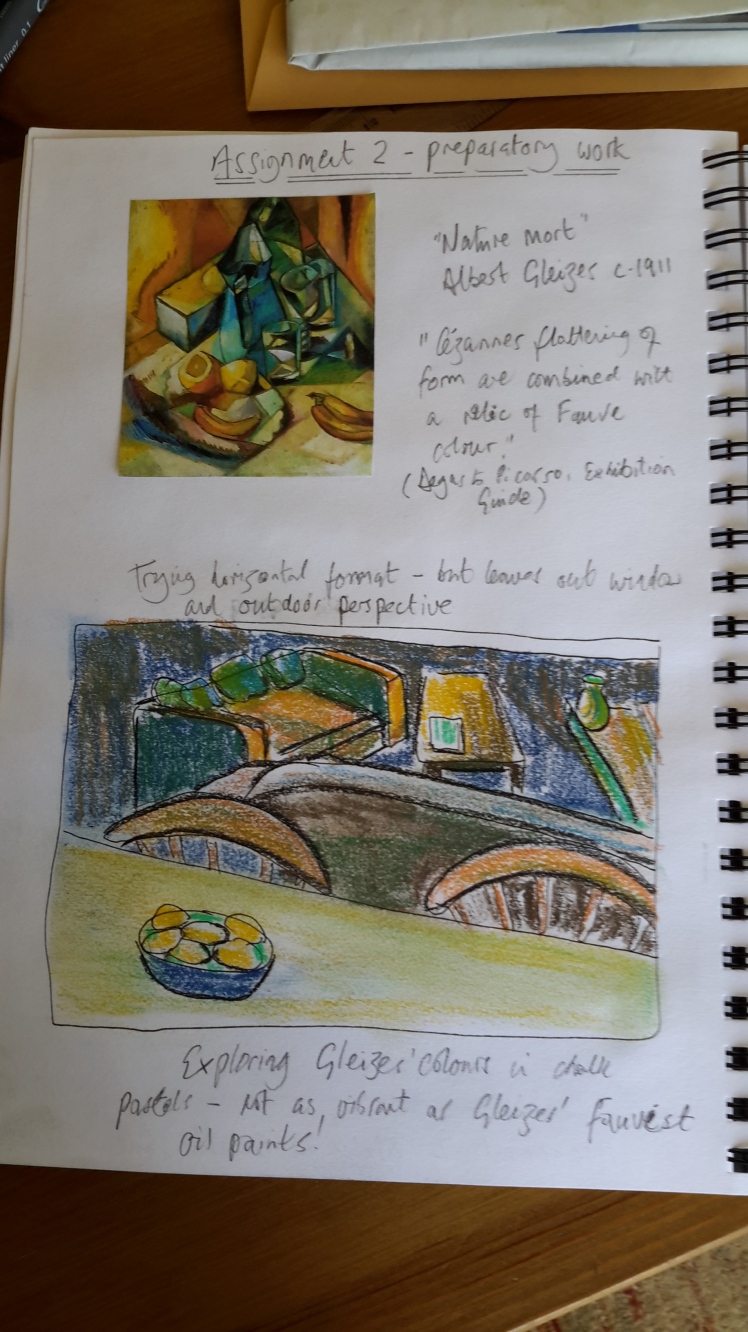 In the picture above from my A4 sketchbook Gleizes’ image is at the top and my sketch exploring his colours in pastel is below. My colours, using pastels, are not as vibrant as Gleizes’ oils.

Thinking further about later Cubism making use of collage and I did the following drawing on the left. Here I have used fairly simple lines and shapes to indicate the main forms in the room and collage with brown paper for the bowl of lemons, glass, larger lamp and neighbour’s house together with a piece of paper from the radio times in the shape of the settee back to give colour and texture. I have also used some simple line work in the settee arm and curtains as well as some black ink shapes to suggest shadow areas of the room and on the left the light cast by the standard lamp.

I liked this image and now wish I had developed in further for my final picture for the Assignment. In the event I continued with another colour sketch this time with a figure and including a sliding door from the dining room into the lounge. I continued to develop my idea, again with the addition of colour inspired by, though not copying, Gleizes’ colours. I felt the result did not sufficiently convey a Cubist feel and that the planes needed to be further broken up.

I worked on A2 paper for the final image, shown below. Again I drew fault lines at random which serve to disrupt the composition especially the tighter perspective, for example, in my original drawing for Exercise 3, the coffee table. The front part of the drawing has a chair which could be on the table or on the floor next to a smaller table; are we looking out of the main window from the side or from face on? There is a further reference to Cubism in the picture on the left which contains part of an image from Fernande Léger ‘s painting The City 1919. 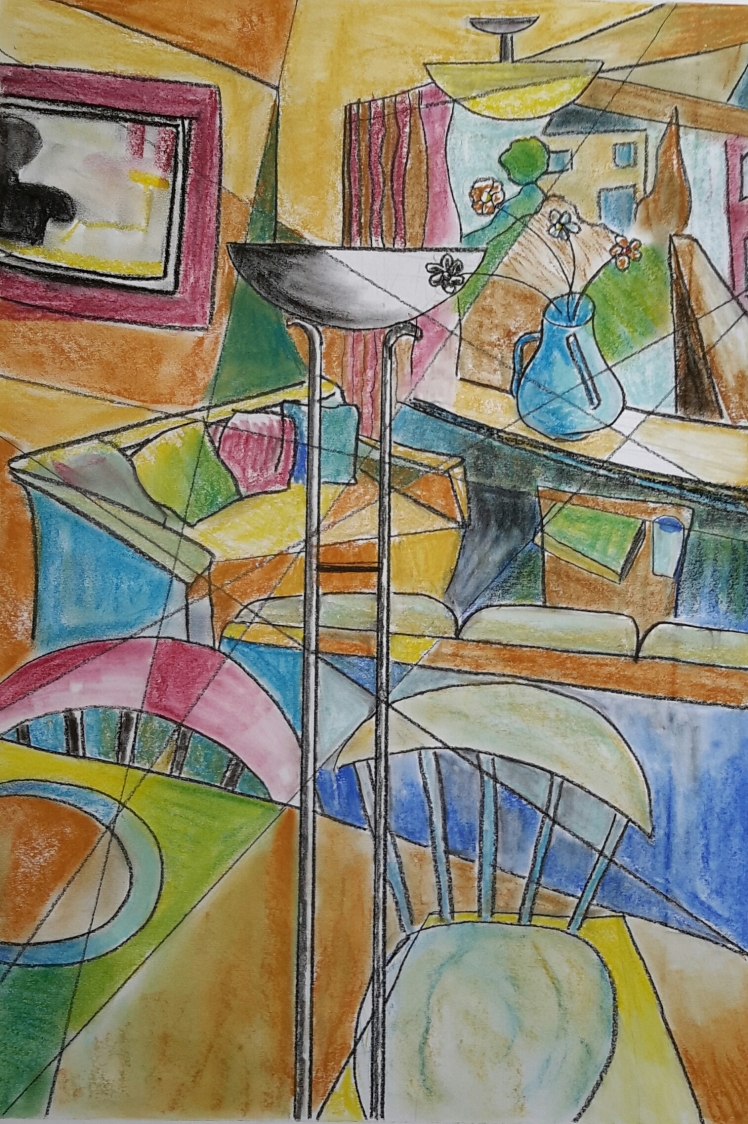 I used pastels for the colours and these are more muted than Gleizes’ more Fauvist oil colours. I laid them flat without suggesting texture or form. This complements the breaking down of the objects into simple shapes. I think the drawing would have been improved had I used  a darker colour for the side and back of the two sofas ie I should have paid more attention to the dark/light contrasts and positive/negative shapes of my earlier sketches for this room.

Picking up the questions set out in the course notes I have attempted to demonstrate a growing understanding in drawing of:

Reflection on Progress Using Criteria from the Introduction to the Course guide – to be completed!

As mentioned above I believe my technical skills have greatly improved with the effective use of a wider range of drawing materials and I feel my observational skills have continued to improve with accurate depiction of objects in the still lifes, tone and shadow and perspective. I need to work more at composition. I tend to work intuitively and usually this is successful but I need to work at why this is so and also to plan my work using and developing sketches and experiments to include different possible compositions. I need to then be ready to change the composition and to know why. The sketch with collage was a good example of this in the Assignment. It marked a departure due to some background reading, I liked the result, but still continued with my original plan.

I believe the quality of my sketches and drawings has improved considerably. I felt particularly that the mixed media drawing in Part 2 Ex 3 and the monochrome work in Part 2 Ex 4 were a considerable advance on work I had submitted in Part 1. I feel they show increased competence in the appropriate use of materials, including in Ex 3 the use of collage, and in producing an arresting image.

I think I have been able to demonstrate creativity through my more effective and organised use of sketchbooks. I plan to develop this further and more creatively following the recent course on Creative Sketchbooks which I attended recently in Manchester. My Cubist style sketches for the assignment, for example, show increased creativity through the ability to explore ideas and approaches and also the mixed drawing for Part 2 Ex 3 mentioned above I believe demonstrates an informed and creative concept, composition and use of materials.

I have participated in two student study visits during this part of the course – Degas to Picasso at the Ashmolean |Museum in Oxford and Joan Eardley, Sense of Place at the Scottish Gallery of Modern Art in Edinburgh. I have also visited two exhibitions, Revolution: Russian Art 1917-1932 at the Royal Academy, London and Vanessa Bell (1879-1961) at the Dulwich Picture Gallery. While at the Ashmolean I went to see the Daisy Linda Ward Collection  of Still Life paintings and while in London visited the Rubens and Rembrandt display in the National Gallery. As well as extending my knowledge of drawing and the still life genre I have also taken ideas into my drawing from most of these visits. For example, my use of Gleizes and Cubism in Assignment 2 and ideas for composition from the Linda Ward Collection, especially in my Still Life in Monochrome. I love visiting galleries and exhibitions. In September I shall be taking a three week art-full tour in Spain followed at the end of the month with a weekend workshop on art in Yorkshire – Moore, Hockney and Hepworth.

I have enjoyed Part 2 very much and feel I have learned so much and my levels of knowledge and skill have certainly increased.