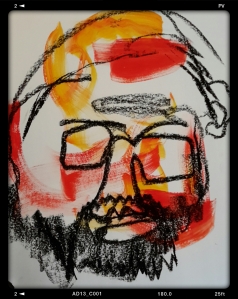 Odilon Redon 1840-1916 was a French artist in the Symbolist movement which began in the latter part of the nineteenth century particularly in France, Russia and Belgium and included poetry and other art forms as well as painting. Redon’s work included paintings, drawings, prints and books.

To many people much of his work can appear strange at first sight. It can be read literally at a realistic level but its meaning is frequently elusive and mysterious. Redon attempted to communicate the hidden workings of his mind. “My drawings are not to be defined. They place us, as does music, in the ambiguous realm of the undetermined”. (Goldwater, R Artists on Art 1945 Pantheon). As he put it in an often quoted phrase he wanted to, “…place the visible at the service of the invisible”. We can see how his work has been inspirational in the viewer-centred approaches of later modern and postmodern art.

From about 1870 and his move to Paris to 1890  Redon worked almost exclusively with charcoal and lithography in shades of black, referring to his output as his ‘noirs’. These media enabled him to express his desired mystical, fantastical, enigmatic images. This can be seen in the following image through which he first gained attention in 1878, Guardian Spirit of the Waters. 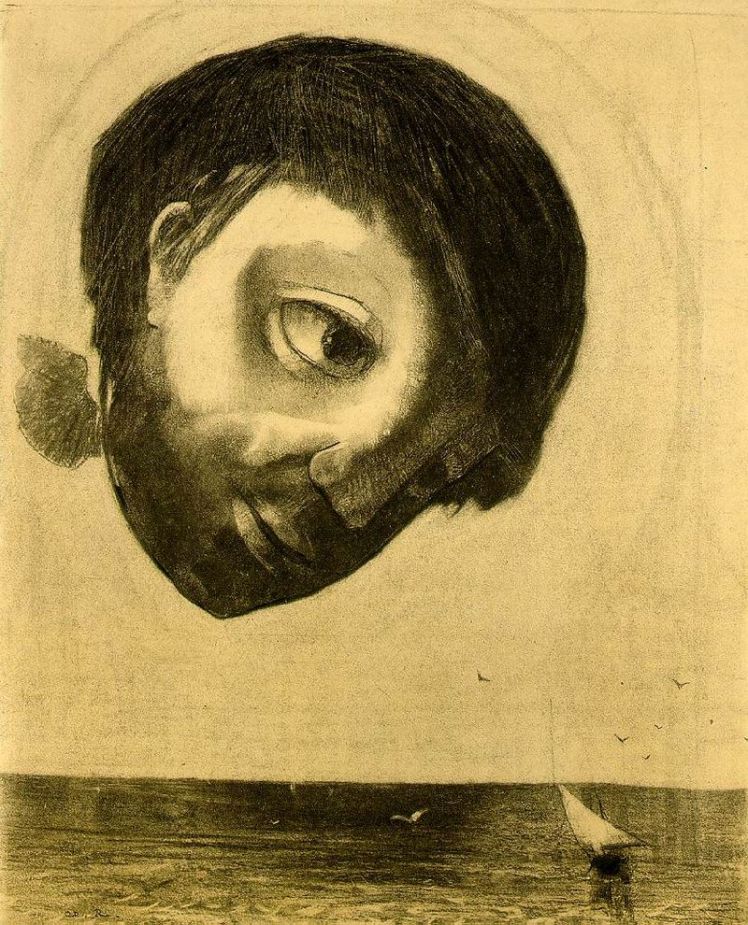 This is drawn, “..in various charcoals, with touches of black chalk, stumping, erasing, incising, and subtractive sponge work, heightened with traces of white chalk, on cream wove paper altered to a golden tone”. (http://www.artic.edu/aic/collections/artwork/90316)

The gulls suggest that the lone little boat is setting out from the known into this vast unknown horizon. The sea tone moves from light to a darker perhaps more foreboding horizon. The head that looks down from the sky is kindly and is maybe a heavenly being indicated by the small attached wing. Its right side emanates or reflects light, heightened by the darker tones of the remainder. The mouth is closed. Is it a heavenly being that no longer speaks, no longer offers hope and comfort? Redon was well acquainted with the work of Darwin and Paris by the 1880s was a world leader in biology. (http://www.19thc-artworldwide.org/spring03/76-spring03/spring03article/220-evolution-and-degeneration-in-the-early-work-of-odilon-redon)

From around the 1890s onwards Redon’s preferred media were pastels and oils yet employed to express his distinctive use of tone. A beautiful example is in the following painting from the National Gallery in London Ophelia Among the Flowers 1905-8. 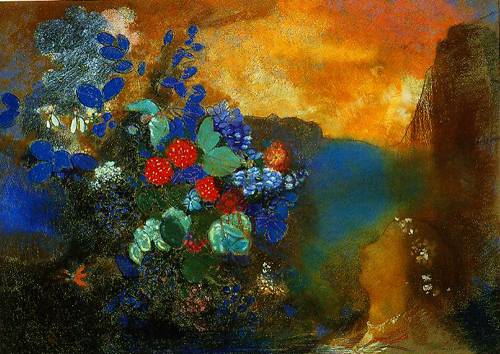 The flowers, strawberries and lilacs, glisten in their darker surrounding foliage. Redon has used both contrasting tone and complimentary colours to heighten this effect. Ophelia, however, is smaller, hazy and muted apart from the jewel-like flowers in her head band. She matches the similar haziness and tone of the background. Gillian Murtagh has observed that Ophelia appears to be fading away into the background and she suggests that this not only represents the final moments of her life as she meets her end among the flowers by the brook but also, “…it can be said that she is finally at one with not only nature, but with herself. In death, she finds that what she has been searching for, she finds herself.”  (http://www.thelondonmagazine.org/ophelia-among-the-flowers-by-redon-by-gillian-murtagh/)

The Atmospheric potential of tone

Tone is a key tool in depicting volume and shape. In reality there are no lines. We are able to read shape from the way light falls over a surface, from the variety of tone on an object or body. Matisse said, “Drawing lies in making the planes recede and advance in the correct relationship to each other and to the whole so that you can feel your way over the form”. (Quoted in Micklewright, K Mastering the Language of Visual Expression 2005 Laurence King) Tone enables us to interpret and relate to the image. A single tone scale for a whole drawing will also help to create relationship and harmony among the various elements.

As w have seen in the above notes on the work of Odilon Redon tone is a vital tool in creating atmosphere in a drawing or painting. The contrasts between dark and lights, for example, can breathe life into the work creating a powerful contrast and creating a psychological experience on the part of the viewer – perhaps of shock, of fear, or suspense, or uncertainty. The degree of tonal contrast may also give weight to different elements in the work and their relationship, for example,  the sharper, bright flowers contrasted with the hazy figure of Ophelia and the soft and diffuse horizon.These contrasting tones also seek to underscore the lifelessness of Ophelia as she approaches death,.or in Guardian Spirit of the Waters the dark tones of the horizon underscore the uncertainties that may await the sailor. By the same score fewer contrasts in tone may contribute to a feeling of tranquility or peace. Redon compared his work to that of music, and as in music tone is a vital tool in creating, sustaining or altering mood and atmosphere.

One thought on “Part one: Research Point – Odilon Redon & the Atmospheric Potential of Tone”

There was an error retrieving images from Instagram. An attempt will be remade in a few minutes.